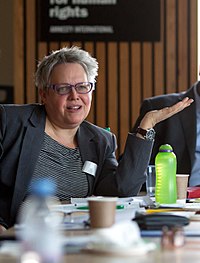 In today’s Times, a piece by Fiona Hamilton, Crime Editor:

A woman who bludgeoned her husband to death with a hammer won the right to challenge her conviction yesterday in a “coercive control” case.

Georgina Challen, known as Sally, had been trying to settle her relationship with her estranged husband, Richard, 61, when she hit him more than 20 times with a hammer in August 2010.

The following year she was sentenced to life with a minimum term of 18 years for murder after a jury at Guildford crown court rejected her defence of diminished responsibility.

Challen’s lawyers claimed that she was downtrodden and controlled by her husband, making her a victim of coercive control, a new legal concept which recognises that domestic abuse can occur in ways other than violence.

In a short hearing Lady Justice Rafferty, sitting with Mr Justice Stuart-Smith and Mrs Justice Carr, granted permission to appeal against the murder conviction. Her solicitor, Harriet Wistrich, who has spearheaded the case, argues that understanding of coercive control is so much greater now than in 2011 that it amounts to fresh evidence. Challen, 63, is supported by her sons David, 30, and James, 34, who believe that she was a victim.

David Challen said last month: “The male influence in her life was my dad. He set the parameters of her world and he was at the centre of it. He was systematically trying to break her down.” The prosecution in the trial portrayed her as a jealous woman who took vengeance on Mr Challen, a car dealer, after he had a string of affairs. He was eating a meal at their former marital home in Claygate, Surrey, when she attacked him.

Clare Wade, QC, for Challen, said that there was now a partial defence of “loss of control”.

She said that the introduction of the offence of coercive control in 2015 showed that the law endorsed “expert thinking” on the effect of such abuse.

Mr Challen made it clear to his wife during the final ten to 15 years of their marriage that she was not to challenge him. Before the killing she had asked him about his plans and was told not to question him. That was the “trigger” for her “loss of control”, which resulted in his death, Ms Wade argued.

Challen was granted legal aid for her appeal, to be heard at a later date.

Mike Buchanan is a British anti-feminist men's rights activist (MRA). He was the founder and remained the leader (2013-22) of this party, before it was relaunched as the Children & Family Party in April 2022. Elizabeth Hobson was the leader from May 2020 to March 2021.

J4MB was throughout its existence the only party in the English-speaking world which was resolutely anti-feminist and campaigned for the human rights of men and boys on many fronts. Those rights are assaulted by states' actions and inactions in many areas, almost always to privilege women and girls. 20 such areas were explored in the party's 2015 general election manifesto.

Mike was the creator of the website Laughing at Feminists.

He has sole responsibility for organizing future International Conferences on Men's Issues (ICMIs) in Europe, and was the sole organizer of the London conferences in 2016 and 2018. He was the conference director for the online conferences in 2020 and 2021.